1967 Ford Ranchero Sedan in front; truck in the rear 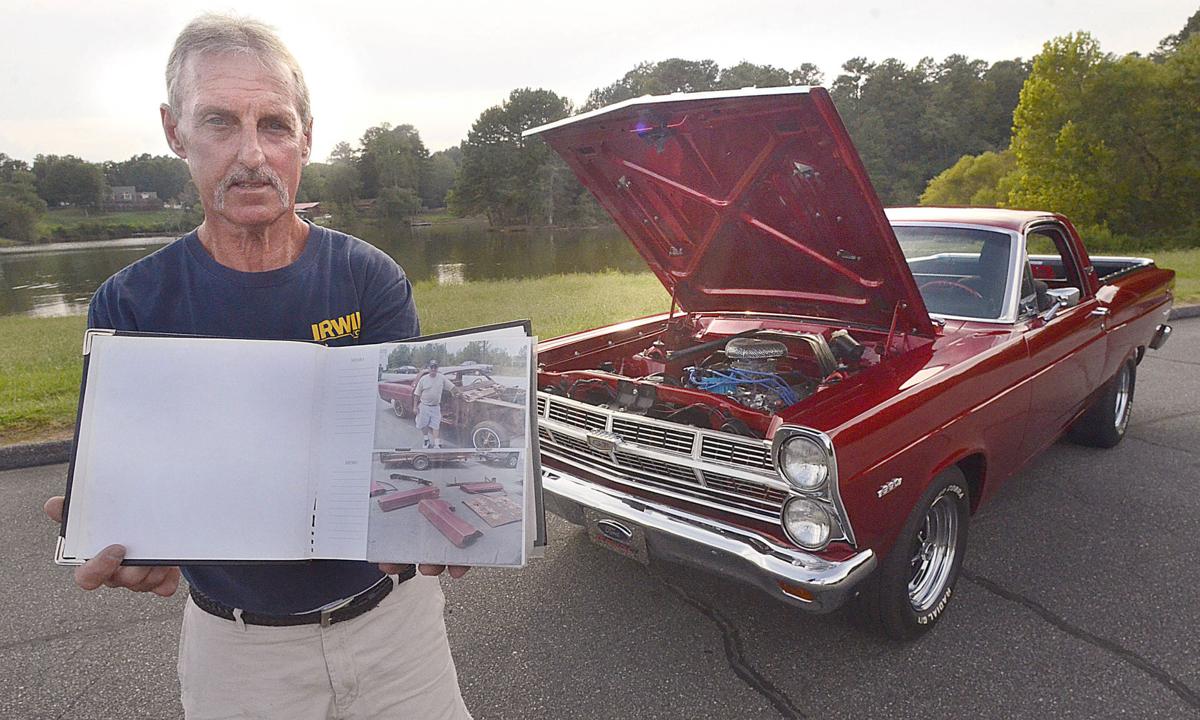 When and how did you acquire the car?

My brother Tommy bought it sometime around 1970. It was driven daily until the engine locked up in 1973. It sat for several years until he installed another engine and drove it until the body had begun to rust to the point he had to park it sometime around 1983. It sat out in the weather and deteriorated for 10 years until it was moved into a garage where it sat until 2006. Tommy had been saving money to restore it for years and in ‘06 he decided it was time for the restoration to begin. It was in such bad shape the first restoration shop admitted it was more than they could handle so the truck was sent to Klassic Rides in Denver, N.C.

The restoration took 16 months to complete. It was completely disassembled and media blasted (a process akin to sand blasting) which exposed more rust. The quarter panels were cut out and replaced. The floor boards were rusted to the point you could see the ground through them, so they were replaced as well. The structure under the front fenders was replaced due to the amount of rust. All of the suspension and torque boxes had to be replaced and the original drum brakes were replaced with updated disc brakes. After all the body work was done, a tricoat paint job was applied to the exterior, the dash, and the engine compartment out of Ford Redfire Metallic color.

The bed area was sprayed with a semi-gloss liner and all of the chrome trim was buffed out to look like new and it got new bumpers front and rear.  The interior was replaced with the original bench seat removed and bucket seats installed along with new headliner and carpet. You really have to see the before-and-after photos to really appreciate where this truck came from to where it is today.

Sadly my brother Tommy passed away in 2010 after being able to drive it for only a few years. He was a great guy. Our family’s go-to guy. I started taking it to shows on the request of his wife Judy, my sister-in-law. After she passed away, my nieces took possession of the truck and told me to build a garage to store it in and take it and show it. My brother always said it was built to drive and show, not to sit in a garage. I’ve honored that by showing it in numerous shows and have won several awards.

Tell us about your car (specs, restoration, etc.).

Do you have a fun or interesting story about the car?

I have a photo book that I display at shows detailing the restoration. People look at the book, look back at the truck and tell me they can’t believe it came from the rusted out mess to what it is today. It truly was an amazing transformation.

Why do you love the car?

Words cannot express what this truck means to our entire family. It was my brother’s dream to have it restored, and he saved money to do it not using any monies that would take anything away from his family. He truly loved his family and always put them first.

What is the most interesting feature of the car?

It’s rare. You very seldom see one. The paint is immaculate.

What do people ask you about the vehicle?

I’m often asked if I did the restoration to which I reply, “If I could do this, I wouldn’t be driving a truck for a living.”  I get asked about the color quite often. It’s 2006 Ford Redfire Metallic.

What value do you place on the car?

Invaluable. No amount of money could buy it. It is so special because it was my brother’s car.