Check Out This Holman Moody Ford Fairlane For Sale 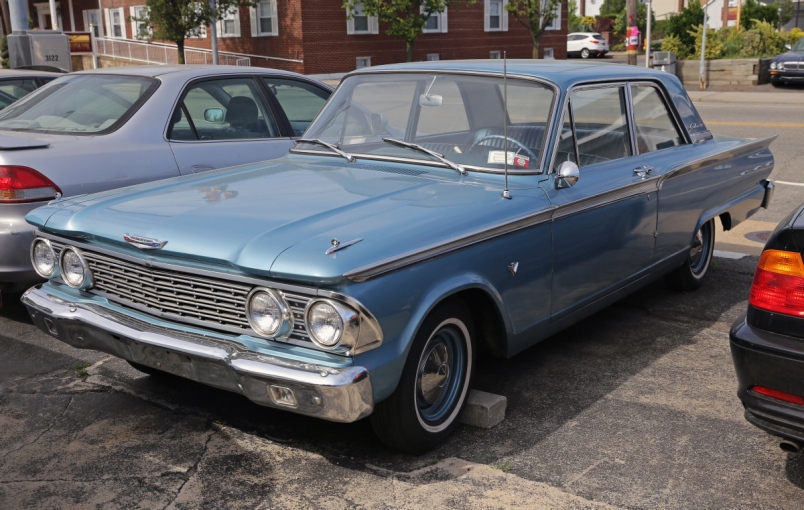 The Ford Fairlane introduced in 1962 was a popular car right from the beginning. But while it was well received, its fame rested not on what could be seen from the outside, but what was under the hood; it introduced Ford’s compact V-8, a versatile and expandable engine that grew into a corporate workhorse.

The Fairlane evolved from the market proliferation that began when the Big Three (GM, Ford and Chrysler) introduced their 1960 compacts to counter the rising tide of imports. They took distinctly different approaches.

Chevrolet followed the Volkswagen theme with a flat, air-cooled rear engine and four-wheel independent suspension. Chrysler’s Valiant was more conventional, although it had vaguely European-influenced styling and torsion-bar front suspension. Ford’s Falcon was most conservatively styled, with an inline overhead-valve six.

The Falcon’s approach proved to be the most popular, and this “modern Model A” substantially outsold its more daring competitors.

No sooner had they introduced their 1960 compacts than the manufacturers began further slicing up of the marketplace by introducing what were variously called midsize, intermediates or senior compacts in 1961 and ’62. They were slotted between the compacts and traditional full-size cars.

The Fairlane name came from Henry Ford’s Dearborn estate, Fair Lane, and had been used on a variety of full-sized Fords from 1955 to 1961. When switched to the new intermediate for 1962, it was advertised that: “This name has a new car.”

It was a very sensible size, because the Big Three’s full-size “standard” cars had ballooned to where wheelbases of more than three metres and lengths over five metres were typical. Weight of 1,814 kilograms required engines of up to 6.6-litre (400 cu. in.) displacement.

The Fairlane’s 2,934-mm wheelbase and 5,019-mm length was definitely a step in the right direction, a return to the size to the original 1955 full-size Fairlane.

The new Fairlane was attractively styled, with strong Ford family hallmarks in such features as large round taillamps, small blade-like fins and a squared-off Thunderbird-style roof.

It had unit construction and suspension similar to the Falcon’s, front A-arms and coil springs and rear leaf springs and solid axle.

The base engine was the Falcon’s optional larger 2.8-litre (170 cu in.) overhead-valve inline six rated at 101 horsepower. Power went to the rear wheels through a standard three-speed manual or optional two-speed “Fordomatic.” The Mercury division would market its version as the Meteor.

It was the Fairlane’s optional engine, however, that was the biggest news and its major claim to fame.

In creating its new V-8, Ford engineers produced one of the best. Using a method called thin-wall iron casting pioneered with the 1960 Falcon engine, they created a V-8 that was even smaller and lighter than the famous “small-block” Chevrolet V-8, which had appeared in 1955.

It had stud-mounted valve rockers similar to Chevy’s and, probably by coincidence, it displaced the same 221 cubic inches (3.6 litres) as the original 1932 Ford V-8. But whereas the first one produced only 65 horsepower, the new one had 145.

The small-block Ford had its moments of performance glory, too. With its compact size, light weight and good power potential, it was the basis of the aluminum V-8 fitted to the Lotus-Fords that brought the rear-engine revolution to the Indianapolis 500 mile race. Californian Carroll Shelby used a hopped-up version in the 1960s to power most of the famous AC Cobras he created out of English AC sports cars.

Although the Fairlane was not a daring design, it was a successful model that lasted with revisions until 1970. It earned its place in history by introducing Ford’s fine compact V-8 engine that grew.

Check Out This Holman Moody Ford Fairlane For Sale