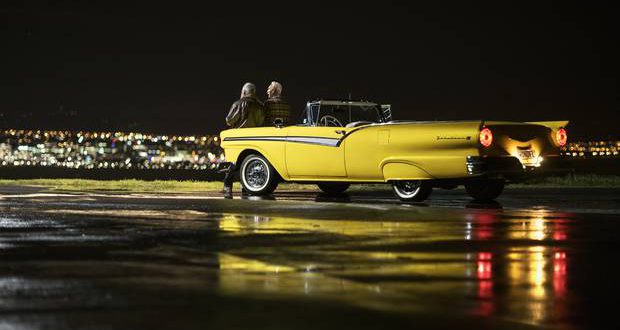 Mercury’s idea to take the combustion engine out of a muscle car and replace it with a fully electric alternative started as a brainstorm on a sheet of paper.

On the left of the page under “Combustion Cars” , you had a list of emotionally charged words that captured feelings typically associated with the growl of an engine: “exciting”, “freedom”, “strength” and “power”, to name a few.

The other side of this page, dedicated to electric vehicles (EVs), provided a far more rational outlook, with words such as “sensible”, “clean”, “considerate” and “quiet” making the cut.

These two lists place alongside one another was essentially the difference between a classic muscle car and a Toyota Prius.

Mercury’s chief marketing officer, Julia Jack, told the Herald the company’s objective with this campaign was to bridge the gap between the rational and the emotional sides of the conversation related to green energy.

“All the conversations related to EVs have been focused on it being the right thing to do, it makes economic sense, it’s good for the environment,” she said.

“All of those things are great, but they ignore the emotional connection people have with cars. We really wanted to open up the dialogue and say ‘well, actually, EVs can be just as wonderful and sometimes even better than your traditional combustion engine’.”

To bridge this gap, Jack and her advertising agency FCB developed an ambitious scheme to convert a roaring, gas-guzzling 1957 Ford Fairlane into a far gentler but equally attractive EV.

Mercury worked with Hamilton-based business Scott Drive and Dunedin-based Control focus to remove the existing engine and revamp the vehicle.

While the exterior was also kitted out with a few cosmetic alterations and a fresh paint job, the now-superfluous car exhausts were left intact, strictly for aesthetic regions.

Jack uses a food analogy to explain the project, saying it’s about having the rationality of salad and the taste of a burger all wrapped in a single option.

The unveiling of the car coincides with the release of an advertising campaign that features a pair of elderly blokes, living within a retirement village, silently escaping detection from a security guard before going on an adventure across the city.

While the traditional advertising will play an important role in spreading the word about the initiative, Jack said Mercury will also be taking the car to “as many events as possible” so Kiwis can get a real look at it.

“Hopefully, this will generate some interesting conversations. We want to get the general public and some real petrolheads meeting Evie,” she said.

Jack said she would like to see New Zealand become a leader in the adoption of electric vehicles, but the lacking cool factor of these vehicles remains a hurdle too far for many Kiwis.

The interest Mercury has in effectively giving green energy a touch of cool factor is because the future is electric and the company aims to establish itself as a dominant voice on the topic.

FCB head of strategy David Thomason said the creative team behind the campaign wanted to avoid “shiny silver suits and hoverboards” in showing what the future would be like. The point of the campaign, he said, was to show that the future is already here – and that it isn’t half bad.

“We wanted to live in the now, and we believe that from here on the infrastructure will accelerate so fast,” Thomason said.

“The second-hand market is developing, batteries are improving and the political context is changing. Everything is lining up.”

Thomason wouldn’t comment on the cost of converting an old-school vehicle into an EV, saying only that it’s not cheap.

Given the high cost of petrol both in money and to the environment, Mercury estimates that a Kiwi household could halve its overall energy costs and significantly reduce its carbon footprint by trading in a petrol guzzler for an EV.

Whether this is enough to convince a die-hard petrol head to trade in a roaring Mustang for silent EV is yet to be seen. 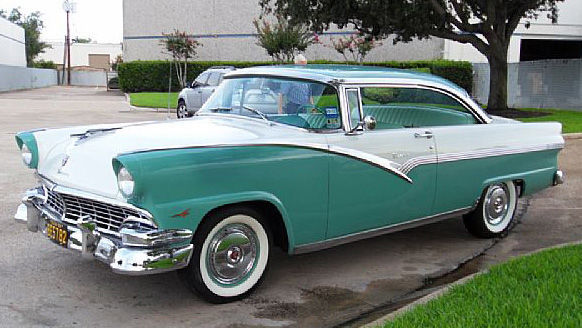 People often ask me how I decide what car to write about on any given week. The answer to that question is complex and, if I told you, I’d have to … well, I don’t know what I’d have to do, but it wouldn’t be pretty.

In the case of this week’s subject car, however, the process was simple. I was “surfing the web” last night and Googled “Ford cars of the ’50s” under the “Images” tab.

Now, let me detour for a moment and say many of my, shall I say “more senior” readers, aren’t exactly computer friendly. Here’s something to dazzle those folks. In 0.24 seconds, “about” (as Google likes to say) 621,000 images appeared before my eyes. As I randomly scanned the thumbnails before me, this beautiful 1956 Ford Fairlane Victoria caught my attention.

Maybe the fact my parents were “green car people” and my father’s 1959 Olds Super 88 was nearly the identical two-tone green hues as this Ford, influenced my brain. That bias aside, it’s hard to argue the beauty in the design of this 50s Ford.

The graceful “sweep spear,” a common 50s styling cue, is very well done. The wraparound windshield, a still relatively new feature, terminated in nicely rectangular “vent windows.” (You may have to explain what a “vent window” is to the millennials and even the Gen-Xers at your next family gathering.)

Fairlanes for ’56 were offered with both six- and eight-cylinder power plants and in 2-door, 4-door and convertible body styles. The “Victoria” moniker designated a “pillarless” (hardtop) coupe or sedan. This Vicky, dressed out in “Springmist Green” over “Berkshire Green” carried a factory base price of just $2,294 back “in the day.” Checking a handful of tempting options from the generous list offered, could bump the bottom line up to a nicely rounded-out three-grand … or about $24,560 in 2011 dollars. One like the green goddess shown on this page, could set you back better than 30 g’s in today’s collector market.

This was the first year for a 12-volt electrical system. Victoria coupe production accounted for 177,735 of Ford’s total 1.39 million units for the year.

Strap In Racing by Big Bigelow: Northeastern Speedway in Waterford

The 1956 Ford Fairlane Victoria that took Jerry Bigelow to the 1966 Championship at Northeastern Speedway in Waterford. The car was rescued and taken to the Speedway this past Sunday. The track reunion for this year is July 15 from 9 a.m. to 2 p.m. Check out http://northeasternspeedway.com/ or their Facebook page. (Photo by Big Bigelow)

Kenny Robinson (a great friend of my Dad’s and winner of the last main event at Northeastern Speedway in Waterford), Bryan Marble and Paul Bellefeuille worked very hard getting Jerry Bigelow’s championship winning car from 1966 back to the Speedway in Waterford, this past Sunday.

They spent countless hours changing and mounting tires and breaking loose the calipers from the rotors. The last year the car raced was 1966.

The car is a 1956 Ford Fairlane Victoria two-door hardtop (no post between doors). When the announcer, Ken Squier, said they were running door handle to door handle, he meant just that – the rig still has door handles.

Intact is the chrome “Victoria” on each door. The little door which covers up the key hole for the trunk is still there. Also still in working order, 61 years after it was built, is the door that covers up the gas cap, complete with the bracket for a license plate.

The right rear red plastic tail light lens remains unbroken. The left one is broken but parts of it are still there. I would have thought they’d have removed those before going to the track.

Dad didn’t use the original gas tank. There is a small door just above the trunk where a steel five gallon oil bucket is mounted. I’m told by Kenny, Dad used to stop at Bedard’s gas station on Portland Street on the way to the track every week.

Back in the day, safety wasn’t a big issue so it shouldn’t surprise anyone the battery was moved from under the hood and mounted right beside the gas bucket.

Let’s just say the roll cage isn’t up to today standards. One look at the cars from back then explains why Chris Economaki called the drivers “daredevils”.

Dad drove race cars for 17 years, from 1949 to 1966. When Waterford shut down, a bunch of the guys went to Thunder Road. Dad was an over-the-road trailer truck driver and was away from home during the week, so Thursday’s were out of the question. He did run some Sundays and holiday shows in the early ’60s at The Road, winning a couple of them.

When he stopped racing he didn’t go to watch. As far as I know he only went to a track twice. It was at the end of 1981 to watch his son Bob start his racing career. He died in February of ’82, at the age of 54.

To see photos from the move, check out Northeastern’s Facebook page. The yearly reunion for this year is July 15 from 9 a.m. to 2 p.m. at the track.

While I personally have never been to Dearborn, Michigan, you can’t be a Ford owner and not know about this city…  I came across an article that was interesting and I think has a valid suggestion…

Check out this letter to the editor on Press & Guide: http://www.pressandguide.com/opinion/letter-to-the-editor-city-s-name-should-be-changed/article_f1a4f2fe-bcd3-5176-b999-a92b402cc7d4.html 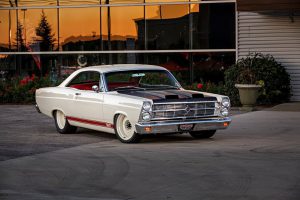 It’s a 1966 Ford Fairlane. Cream White in color with a red stripe along the bottom and a red interior, blacked out hood and decklid. 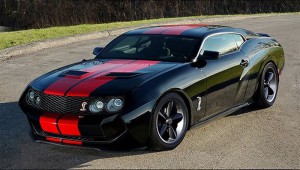 Not sure if I like this mock up look of the car, but I like the idea of a retro looking Torino (or Fairlane).

As retro cars continue to dominate our attention, with everything from new Mustangs, Camaros, and Chargers to Beetles and Fiat 500s in new car dealerships, it’s time to bring back Ford’s intermediate class competitor to theChevelle – the Ford Torino. 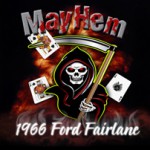 Can’t believe how I have neglected the website the past few years.  Well as you should have noticed upon entering the site, that we have completely changed it!  Hope you enjoy it.  We still have minor updates to complete and add older items, but for the most part we are back up and running!

The Good – New look, easier for updates, and hopefully a better experience for everyone.

The Bad – We lost all comments to past posts, but with the upgrades I’m sure you’ll agree it was worth it. 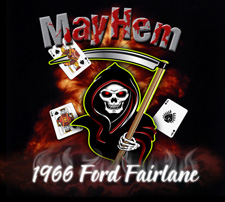 Finally, after years of toying with the site, and going back and forth, finally found the time to get this site live again. Would love to hear from other Ford Fairlane fans!