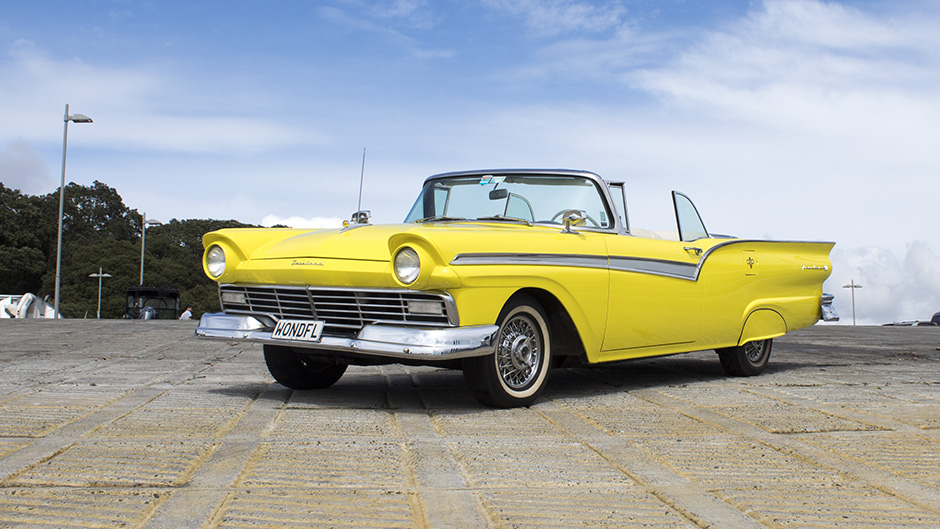 To prove that electric vehicles are cool and can be an emotional as well as a rational choice, energy company Mercury created Evie the bright yellow fully-electrically powered 1957 Ford Fairlane convertible which has recently featured in a television advertising campaign.

Evie has become the most recognised member of the Mercury team, and even when parked outside the company’s offices in Newmarket, both staff and members of the public are immediately drawn to her presence, with many taking pictures and selfies on their smartphones.

NZ Autocar recently enjoyed a short cruise around Central Auckland in Evie, with her “minder” Trippy (vehicle wrangler Mike Tripp) behind the wheel explaining her finer details to us.

Nothing makes a statement like a bright yellow classic 1950s American convertible, and there are many smiles noted from other motorists and pedestrians as we make our way to Okahu Bay for a photo shoot.

Much like modern electric vehicles, Evie offers a very quiet driving experience, there’s some road noise from the tyres, and some wind noise around the windscreen when the electric roof is lowered, but she has plenty of oomph when needed for a swift getaway.

The creation of Evie was the result of a brainstorming process between Mercury and it’s agency FCB to prove that electric vehicles can be fun and exciting and that they provide the same dynamic experience as a car with a internal combustion engine, apart from the lack of sound.

Mercury purchased her from a private owner in the Bay of Plenty before shipping her to Dunedin for the powertrain transformation. Dunedin-based James Hardisty and the team from Control Focus were responsible for Evies conversion to electric drive using a Siemens bus motor and lithium iron phosphate batteries from China.

The 50 kwh battery pack contains 218 cells and weights 414kg, and Scott Drive in Hamilton was responsible for building the motor drive. The electric motor produces 170kW or 12,000 rpm so Evies three-speed Ford-O-Matic automatic gearbox was retained, rather than running a direct drive to the rear differential which would possibly break it.

Evie originally weighed in a 1.9 tonnes but the conversion to electric drive means she now comes in at a healthy 2.2 tonnes. At 5.5 metre long and 2.2 metres wide her dimensions are similar to a large Ute.

Because Evie was born as a convertible her chassis was strong enough for the conversion to electric drive but the rear suspension received an additional two leaves, while the front suspension remains unchanged.

As part of her transformation, Ron and Nick from Ron Wood Electrical in Point Chevalier did the automotive electrical work on Evie. Most of the upholstery in Evie is original and in very good condition but Walter from Mr Snippet in Grey Lynn tidied up the carpeting.

It was Peter Lineham and Warren Gibson at Chandler Panel beaters and Lineham Spray painting in Grey Lynn who resprayed Evie in the fetching shade of Mercury Yellow, which has been registered as an official colour according to Trippy.

Depending on weather and traffic conditions as well as Trippy’s driving style, Evie’s driving range will vary from 90km to more than 120km on a full charge, and like modern EVs the engine is regeneration capable, taking your foot off the accelerator will automatically do this. Evie has three recharging options. 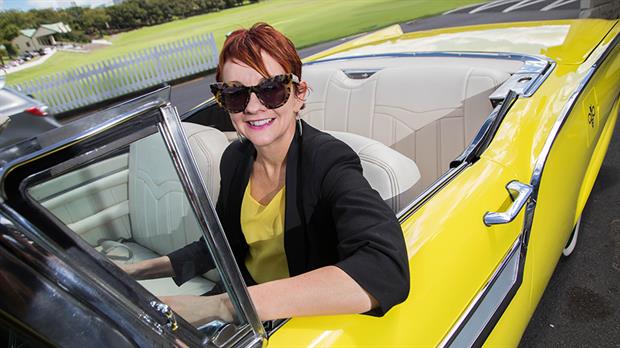 Mercury chief marketing officer Julia Jack says watching people react to Evie’s presence has been the most fun part of the journey.

The name Evie, a play on EV, was conceived by Mercury’s head of brand and marketing Ben Harvey-Lovell for the bright yellow convertible and Jack says it was a logical choice.

Before launching Evie officially to the general public, she took a road trip around the Mercury offices to meet the staff.

“The buzz created by the staff about Evie certainly exceeded our expectations, they really engaged with her and continue to do,” says Jack.

“We were blown away by the teams positive response.”

Evie made her first official outing to a Caffeine and Classics meeting in Auckland, followed by an appearance at the Beach Hop in Whangamata, which according to Jack saw a very positive response from the other participants and guests.

“It was a really good reaction from the Beach Hop crowd, the people there were very positive towards Evie and they acknowledged that electric is the engine of the future,” says Jack.

Jack says Mercury has a few more adventures lined up in Evies calendar. There will be some more television appearances to show people the benefits of electric vehicles and then there is a big summer calendar of events planned for her.

Evie will make appearances at the Big Boys Toys event in Auckland in November 16 to 18, followed by visits to various Ford dealership showrooms, and she will also take a South Island road trip during the 2018-2019 summer.

Original Story can be found here…