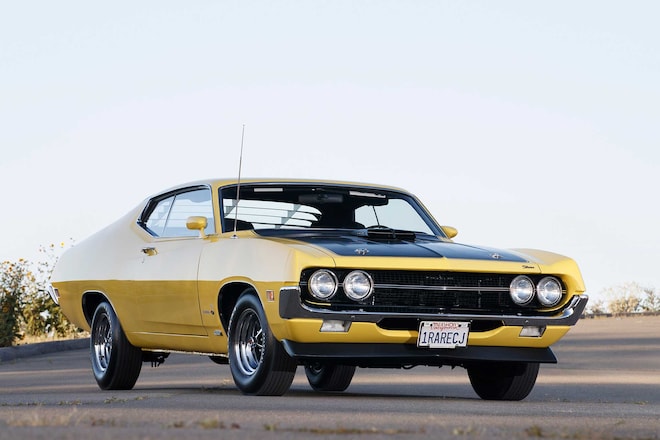 For 1970, Ford’s intermediate lineup was all new. Up to and including the 1969 model year, Fairlane was the main model, with Torino a high-end trim level. In 1970, the Fairlane, a model that was introduced in the 1950s, was relegated to the entry-level-trim base models. With the introduction of the Maverick in the spring of 1970, the Falcon nameplate was being phased out of the Ford lineup, but not before it was applied to an even more stripped-down midsize model. Confused? You should be. It was one of 17 models in Ford’s midsized lineup for the year.

The Torino, though, stood out, especially the high-performing GT and Cobra versions. Even among that sea of Ford intermediates, Torino garnered enough attention that it was awarded the Motor Trend Car of the Year award for 1970.

Some 407,493 Ford intermediates (Torinos, Fairlanes, and Falcons) were built that year. Of those nearly half-million cars, just 7,675 Torino Cobras were made. This one is owned by longtime car buff John Chencharick. Originally from New Jersey, his family migrated to the Golden State in 1959. His first car was a 1959 Tri-power Pontiac Star Chief. It was followed by, of all things, a 1971 Toyota Corolla purchased new. After some discussion with the dealer, Chencharick became a sponsored driver for them and raced the now modified 1600 Corolla at Irwindale Raceway.

“Going back to my college days, I have always loved Mustangs and Shelbys,” Chencharick recalls. “My buddy Frank Gilbert bought a 1969 Mach 1 Super Cobra Jet when he returned from Vietnam. We had a lot of fun in that car. It started a passion for me with muscle cars. But even in 1970 to 1974, if I found a nice Mach 1 or Shelby, the insurance was cost prohibitive.”
In 1974 he purchased his “dream car, a Pontiac Trans Am. Big chicken on the hood, 455, white with burgundy and bright red interior. Beautiful car that I still own to this day. However, I still wanted a Mustang.”
He finally found one, a 1970 Mach 1, in 1984. “It was a 428 SCJ, shaker/slats and a four-speed with Drag Pack and Vermillion paint. A truly incredible car. I decided to make it better and started a correct restoration, my first attempt. It won several awards and made a few magazines.”

After owning the Mustang for 14 years, Chencharick felt it was time to let it go and retire from car shows. “A year later, I was missing the Ford shaker and the Cobra Jet. So I started a new hunt. This time, however, I wanted something with a little more legroom and offered a little more comfort.”

Chencharick called a few muscle car dealers and hit “pay dirt” with Mershon’s in Ohio. “The salesman there informed me that they were going to look at a Torino that I might be interested in. The next day I received a call from the dealer, and I had them send me photos.

“The car was very straight and in very good condition. It was equipped with a 429 Cobra Jet motor, C-6 transmission, shaker hood, rear slats, front spoiler, more room inside than my Mach 1, with nice yellow with black matting. The car stood out, but still had the rarity that would give me the ability to not see others like it at shows, or other car outings. I really liked that option. A deal was made, and the car was on its way to California.” This was 13 years ago, in 2005.

Once the Torino arrived, Chencharick set out to make it perfect. Through diligent research, he learned more about the car, which showed just 24,000 miles when he bought it. The car’s first owner lives in Erie, Pennsylvania, and at some point parked it in his barn. A few years later, it was learned that sap from the barn roof had leaked onto the car, from the top of the windshield to the cowl. The owner called his insurance company, and the agent was amazed at the condition of the Torino. He informed another agent, Chris Zimmer, who was a muscle car guy. The car was repainted where needed. Around 1991, Zimmer was able to purchase the car with approximately 12,000 miles.

Chencharick spoke with Zimmer, who said he sold the Torino to another local, Gary Smith, who owned a body and repair shop. Smith told Chencharick that he never did any additional painting to the car. He did, however, sell the Torino to a man from New York in 1998. He estimated the mileage at 19,000.

Chencharick explains how he took the Torino to the next level. “Finding a car this well preserved, the car cried out to be improved. I wanted to eliminate some rattle-can locations and restore the car to what it should be. It was so well maintained over the years that I wanted to preserve it further. Along the way I have made some incredible friends who have assisted me in upping the Torino game, making it a showstopper. This has been done with their expertise in mechanical work or spending the time teaching me.”

The Torino has its original powertrain. Upon internal engine inspection, the original pistons (marked CJ429) are in use, as are the stock rockers, pushrods, intake, Quadrajet carburetor, exhaust manifolds, and cylinder heads. The engine had not been bored, as it had very little wear. A custom Comp Cams camshaft was designed by engine builder Jim Van Gordon of Van Gordon Racing in Upland, California. The engine was rebuilt and blueprinted, and the new cam helped move air through the huge 429 heads. Power output is estimated at 420 hp at 5,400 rpm and 490 lb-ft of torque at 5,400 rpm, quite a bump from the 370hp/450 lb-ft ratings the Ram Air CJ got from the factory.

Over the years, the car has been displayed extensively. At the 2012 Palos Verdes Concours it scored 94 out of 100 points. It received various awards, including Best Muscle Car, Best Ford, and Best Original. It has been displayed twice, in 2015 and 2017, at the prestigious San Marino Motor Classic. It was displayed at the Fabulous Fords Forever 45th Anniversary of the Torino, and the 2018 Grand National Roadster Show, where it was one of 100 cars invited to its prestigious Muscle Car Gathering. It made a return trip to Fabulous Fords Forever for the 50th Anniversary of the Cobra Jet. Also this year it picked up a Best in Class trophy at the All-American Car Show with AACA judging.

“While at the San Marino Show in 2017 with the Torino, I had the opportunity to speak with Jay Leno,” Chencharick tells us. “He approached me and asked if the Torino was my car. We had very nice conversation. He stated that he liked the rare stuff, and the Torino was definitely in that category. He said that I should be congratulated for the job I did and thought the car was an excellent example. I thanked him for the kind words and felt like I had just won San Marino for the recognition he had given me. Pretty cool.”

When asked about his car’s best or most unique attribute, Chencharick says, “The thing I love the most about this car is the rarity of it. I have very rarely ever seen another, and it’s extremely rare to see one at such a high level. These cars just don’t get the recognition they deserve. Their lines, ride, and sleek look, along with style and power, are very much underappreciated.”

What’s on the agenda for the car? Chencharick wants to continue to improve it and one day, when time permits, take her to the Muscle Car and Corvette Nationals to be displayed. That would be the ultimate celebration for this car’s travels.

We’ve seen this stunning example of Ford power many times over the years and feel that it deserves a spot at MCACN. Bob Ashton, are you listening?